The return airfare for this adventure trip - so called as it involves a myriad of different outdoor activities such as hiking, rock climbing, kayaking, snorkeling  and (potentially) scuba diving – had only amounted to a meagre sum of MYR161 (THB1600) as the airfare had been purchased during one of Air Asia's wonderful promotions sometime last year. The total cost was also kept low as no baggage allowance had been added despite carrying climbing gear (harness and climbing shoes), snorkeling/diving gear (mask, snorkel, and fins), as well as other bulky electronic gear like my Nikon D7000 and my Asus N55SF Notebook in my 55l High Sierra Explorer Backpack.

Having just returned home from my annual climbing trip to one of the world's best climbing spots, Railay, I found, to my dismay, that all Deep Water Soloing (DWS) had recently been banned! DWS is a thrilling way of climbing that entails free climbing (without a rope and harness) up a cliff and jumping or falling off the rock into the deep water that lies below! END_OF_DOCUMENT_TOKEN_TO_BE_REPLACED

I had decided to make the trip coincide with the Songkran festivities as we had thoroughly enjoyed the festivities the year prior. Here is a video of Railay, filmed and edited by a close friend of mine, Andy Saiden:

Once we cleared the long immigration queues, we proceeded to the shuttle bus counter since the group this year was significantly smaller in size. The tickets amounted to THB150 each for the 40 minute bus ride from the Krabi Airport to the nearby town of Ao Nang. Despite having asked the driver to drop us off at the Ao Nang beachfront where the long-tailed boats departed periodically to West Railay, he instead attempted to take us further down the road to what he claimed was the Ao Nang stop at the Krabi jetty (possibly Noppharat Thara Beach?). I have a feeling that he gets commission for dropping off his passengers there as the cost of boat rides to West Railay from there would very likely be significantly higher. By the time the bus actually stopped however, we were pretty far from the beachfront and were forced to walk back.Ominous storm clouds loomed in the horizon, which then unknown to us was to become the leitmotif for the entire trip, as we walked to the ticket booth for the long-tailed boats. The ticket booth is located at the corner of the L-shaped road that joins the main road (that goes back up the hill towards Krabi town) to the road that runs parallel to the Ao Nang beach. One is able to directly approach the owners of long-tailed boats that are waiting but if the group doesn't have at least 8 people, the difference in cost would have to be shared out between the passengers. The ticket booth, on the other hand, sold tickets for THB100 for a one-way trip to Railay per person since the boats would only leave once the sufficient number of passengers had gathered. The long-tailed boats themselves (Ruea Hang Yao in Thai) are so named due to the automotive engine that is mounted on the stern with a long metal pole connecting the drive shaft to the propeller.

Location of ticket booth for the long-tailed boats to Railay 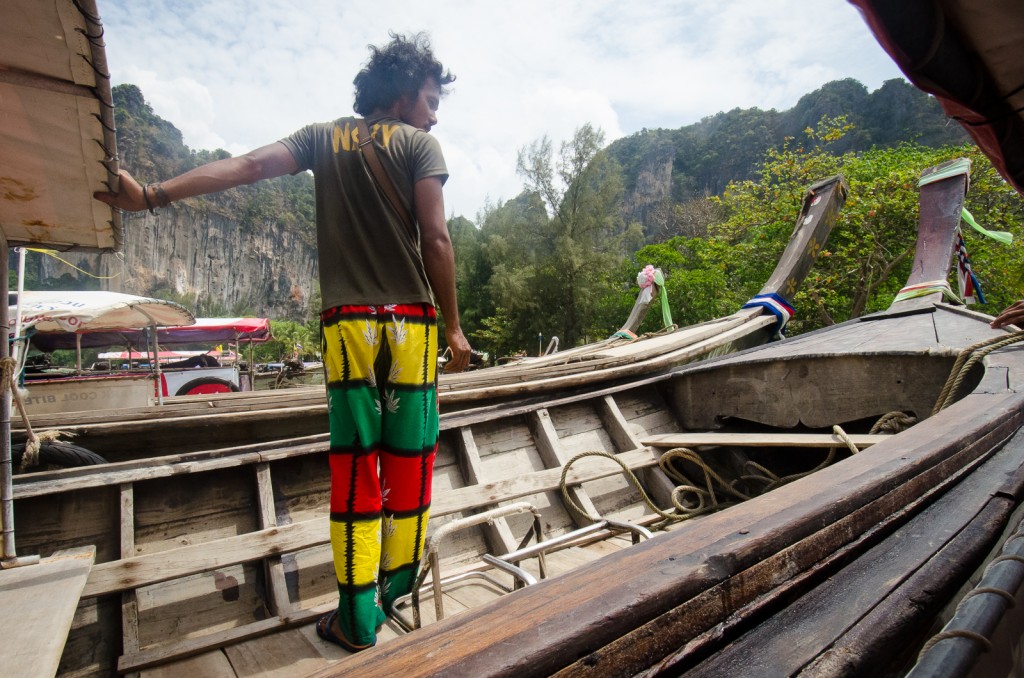 As we made our way from West Railay to East Railay via a narrow shop-lined alley appropriately named 'Walking Street', I noticed to my fascination a large number of Eurasian children either loitering about or playing with other Thai children. The numbers seemed to be significantly higher (I noticed four Eurasian children in the first 5 minutes or so) than what you would find anywhere else as I find that first generation Eurasians such as myself tend to be extremely rare wherever one goes. The couples also seemed to always consist of an Asian male and a Caucasian female, leaving me wondering whether there was some natural proclivity that accounted for this combination or if it was rather due to some cultural (possibly patriarchal) element.

Since Jamie & Cass had already organized their accommodation at Viewpoint Resort (which was where we had stayed for the last two trips), I instead made my way to the (far more) humble Rapala Rock Wood Resort, a backpacker lodge of sorts that had a number of ramshackle bamboo bungalows available for a (relatively) low price. Rapala also had a restaurant at the end of a long flight of stairs that served some of the cheapest food in all of Railay. I was initially offered a room with an attached bathroom for THB500 a day but after instead meeting and bargaining with the owner, we settled on a THB400 room with a shared bathroom that had its rates reduced to THB2500 for a week (MYR36 per day). The room was a very simple 3m x 3m room, with a thin double mattress on the floor with 2 towels, 2 pillows and a small, thin blanket provided. The wall mounted fan was strong enough to ensure that I wouldn't suffer from the sweltering heat which was all that I really required.

Before I left the room for dinner, I fastidiously set up my travelling security measures - basically taping a piece of string above the door that would let me know if there had been any intrusion, connecting the laptop (that was to be sequestered under the mattress) to the laptop security cable that had been wound around the frame of the room, as well as a rubber door stopper ready for when I got back. I had a huge dinner at Rapala where I ravenously ate two meals that ultimately ended up costing THB205 in total along with drinks, seemingly setting a precedence for a voracious appetite that was to remain throughout the entirety of the trip. Jamie, Cass and I then walked around Railay noting the obvious differences from the year before that were brought upon by the inexorable development of the area due to tourism. Hot Rock, the climbing shop that we had frequented on the previous two trips for Deep Water Soloing (or 'cliff jumping' as the owner Luang likes to call the activity), had also moved to another location. Luang's wife, Saralisa, and son, Liam, were also nowhere to be found.

Weariness caught up with me shortly after as I had been awake almost the entire night editing the photos of a recent music and arts event that I had covered. So after purchasing a small bag of detergent for my laundry that cost THB10 I returned to my room for some much needed sleep.

Nipping Over to Ao Nang

The ubiquitous sounds of cicadas (such as the enormous Empress cicada (Pomponia imperatoria) that is found in Malaysia) and the songs of birds greeted me as the sun rose that morning but the sounds were quickly encompassed by the loud drone of the engines of long tail boats. Breakfast basically consisted of two cans of Birdy robusta coffee (THB20 each) and two banana pancakes (THB30 each) and as I was accompanying Jamie and Cass as they were having breakfast, Michael Lakos, an Australian who was living in Railay whom we had met the year before on our Deep Water Soloing trip with Hot Rock wandered over to greet us before heading out for rock climbing. We then proceeded to walk over to Railay West in order to get a long-tail boat to Ao Nang.Ao Nang was as I had remembered it, basically a myriad of shops adorning the sides of the road catering to the whim and fancy of all the tourists wandering by. The wares ranged from a huge variation of tour packages to souvenirs and cliche Thai clothing such as the Thai fisherman pants. I ended up purchasing two Krating Daeng singlets for THB150 each. Initially the shop keeper was asking for THB350 each but after just starting to walk away saying that I wanted to check the prices of the other shops first, he hastily blurted out his 'lowest price'. Lunch was to be found at one of the small shops sequestered in a rather nondescript alleys only known to us as we had stumbled upon it the year before. Two plates of chicken fried rice cost me THB100. I added lots of chili flakes to give me the extra kick that I needed but was ultimately glad that there was free iced water available. We then proceeded to make our way back to Railay the same way that we had come (boat ticket costing another THB100). 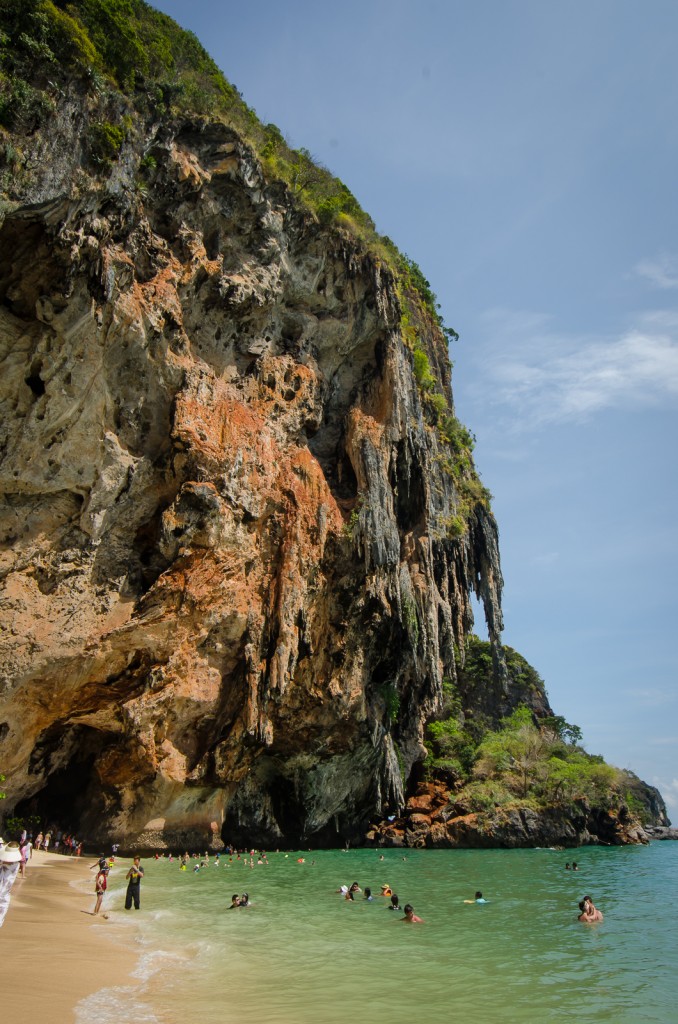 As we made our way to Phra Nang beach, we came upon large numbers of the common frugivorous dusky langurs (Trachypithecus obscurus) that can also be found in the area - albeit with relative difficulty due to their shy nature) Long-tailed macaques (Macaca fascicularis) that were scavenging for food with their heads buried in the rubbish bins just outside Phra Nang cave. According to local legend, Phra Nang was the wife of a fisherman who was lost at sea, who apparently lived out the rest of her days in the cave awaiting her husband's return. There were also phallus-shaped wooden carvings just outside the cave that were supposedly offerings for fertility.

The visibility in the sea around Phra Nang beach was horrendous, definitely less than 1 metre since I was unable to see my fingertips when stretched out at arms length, leaving absolutely nothing to see underwater. I compensated for this however by floating on my back just gazing at the gorgeous rock formations towering directly above. Despite the enormous precarious-looking stalactites that embellished the cliff face, I found the entire visage to be somewhat serene. 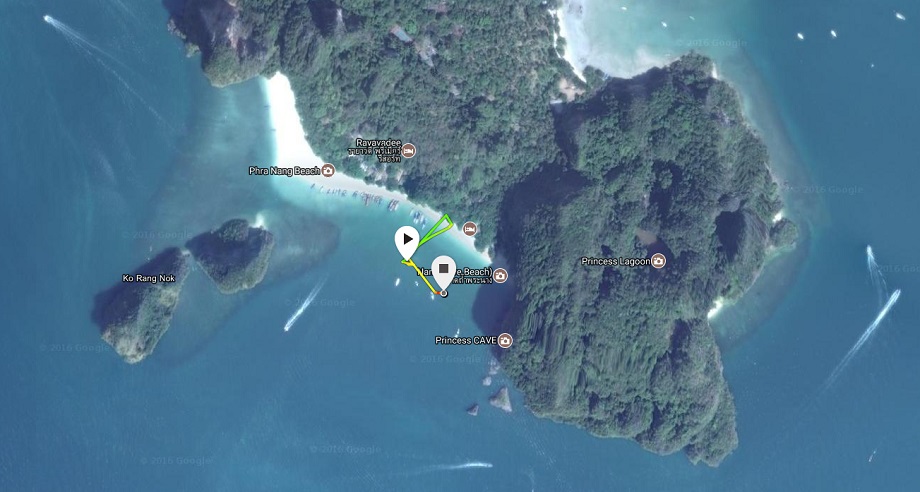 The information from the Suunto Ambit for this 'swim' can be found on my Movescount Page. 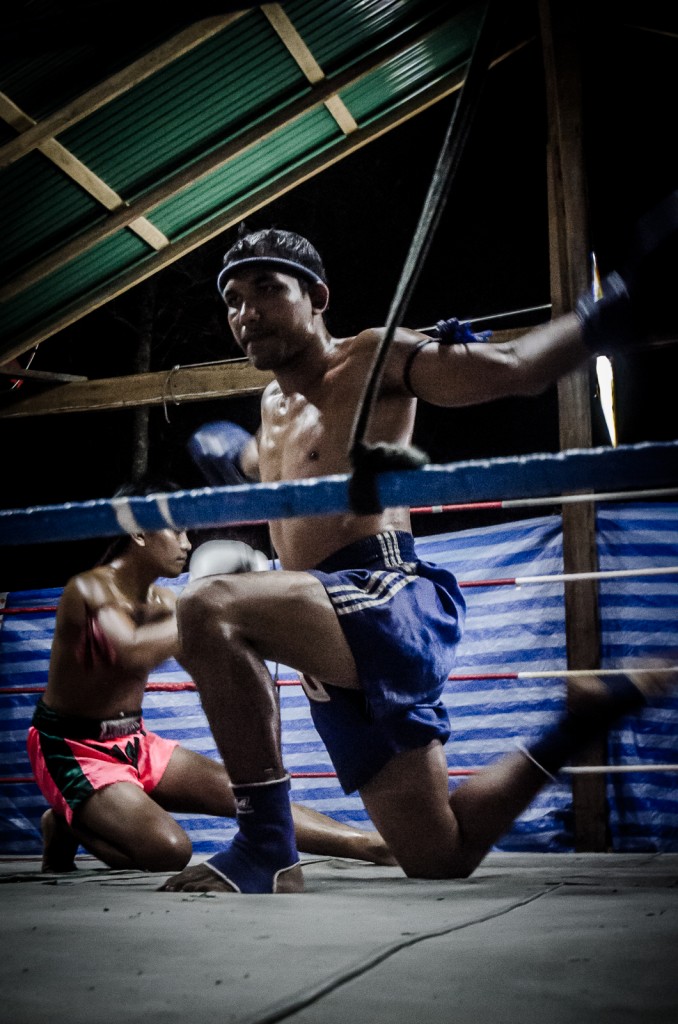 After washing up we met once again for dinner where I helped myself to a plate of American fried rice and a plate of fried beef with some extra rice thrown in for good measure along with some amber nectar to wash it all 'down', which all came up to a total of THB325.

Tickets for the Muay Thai fight (locals call it Thai boxing) that night had cost us THB100 each which had secured us some great seats in the front row. I was also very eager to see Yaya fight again as his fights had been pretty eventful the year before. As soon as the fight began after the Wai Khru ritual, it became quite clear that Yaya was the more experienced fighter out of the two. He also made his aggression fairly evident from the start. Yaya landed more shots than the other fighter including some occasional spinning back fists. Yaya finally prevailed with a knock out in the 4th round via an acrobatic kick to the opponents head. The fight was immediately followed by some fire poi performances on the dance floor of the adjacent Bamboo Bar. 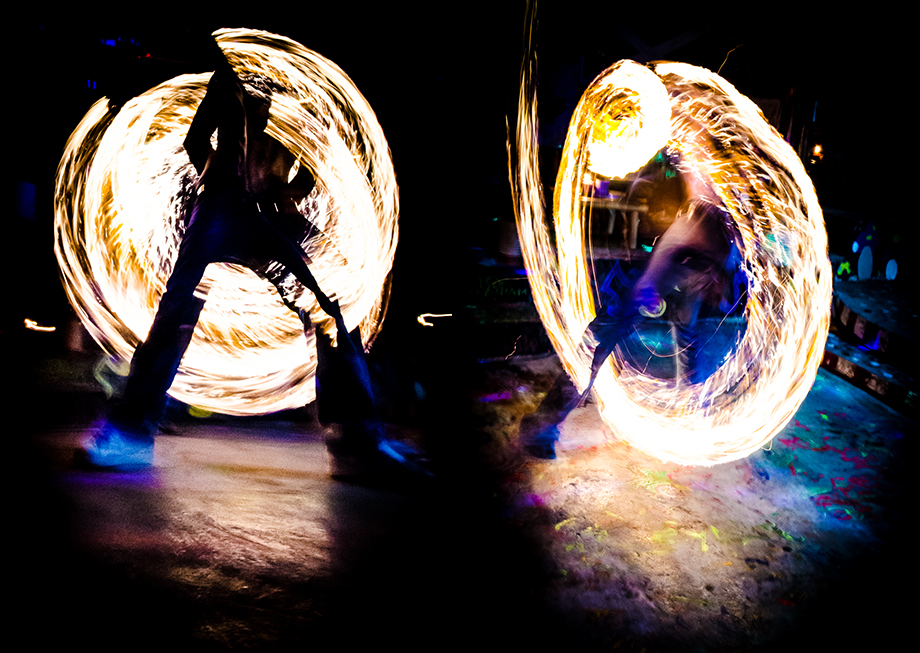