I had another lucid dream that night. For some reason I was in Singapore this time around, and was standing on a beach with a rented bicycle by my side. I was looking out over the ocean and was watching some world-class waves being churned up by hurricane-strength winds. Suddenly, a huge tidal wave swept through the coast and washed away everything in its path except for me. The dream had probably been inspired by the ridiculous howling winds that had swept down the valley that night and had buffeted the small town of Gokyo.I had decided to rest and recuperate, and Gokyo was the perfect place for that. The cumulative strain of the last two weeks of hiking had left me quite drained and it had affected my hiking over the last two days, especially the climb up to Gokyo Ri the previous day. I had decided to hike up to the fourth and fifth lake that lay about 5 kilometres north of Gokyo. The hike was expected to take about 5 hours return, and had a total ascent of less than 500 metres which meant that the incline was (relatively) gentle. Florian and his mother had decided to just rest the entire day as his mother's cough had regrettably worsened. They did mention that the temperatures were reported to be as low as -20°C up there when they heard that I was planning to walk up to the lakes. The owner of the lodge also chimed in and told me a story of a family that had hiked up to the fifth lake a month before. The father and son had climbed some rocks and the rocks ended up collapsing under their weight. One of them ended up with a head injury and needed to have an air evacuation. I was left undeterred, but the story did serve as a poignant reminder that caution was necessary at all times.The hike up to the fourth lake

proved to be very enjoyable after having gotten some decent rest. The fact that I also didn't have to lug around my backpack probably helped immensely too. The walk just took 40 minutes but I spent an entire hour just walking around the lake and exploring its immediate vicinities, including the viewpoint that lay up on the side of the Ngozumpa glacier moraine. 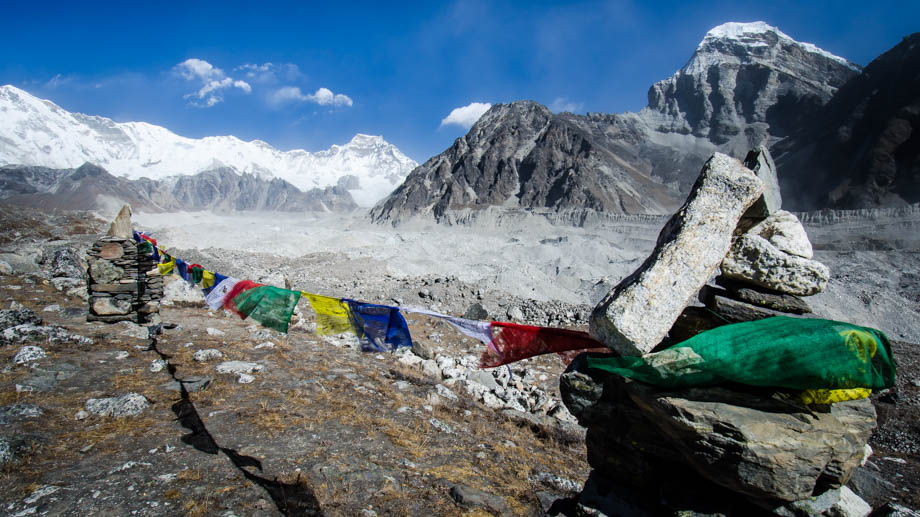 Looking out over the Ngozumpa glacier with snow-covered Kangchung West (elevation : 6089m) in the centre of the image
The views of the Ngozumpa Glacier from the viewpoint were absolutely breathtaking, so I lingered there for a while to soak in the views. On the way down however, I met an old French couple that were easily in their 70s or 80s. When they found out that I had come from Malaysia, their age just seemed to melt away as they became all giddy and were overcome with excitement. It turned out that they had had a great time many years ago climbing the highest mountain, Kinabalu, and scuba diving in the gorgeous coral reefs around Sipadan Island, the only oceanic island in Malaysia. 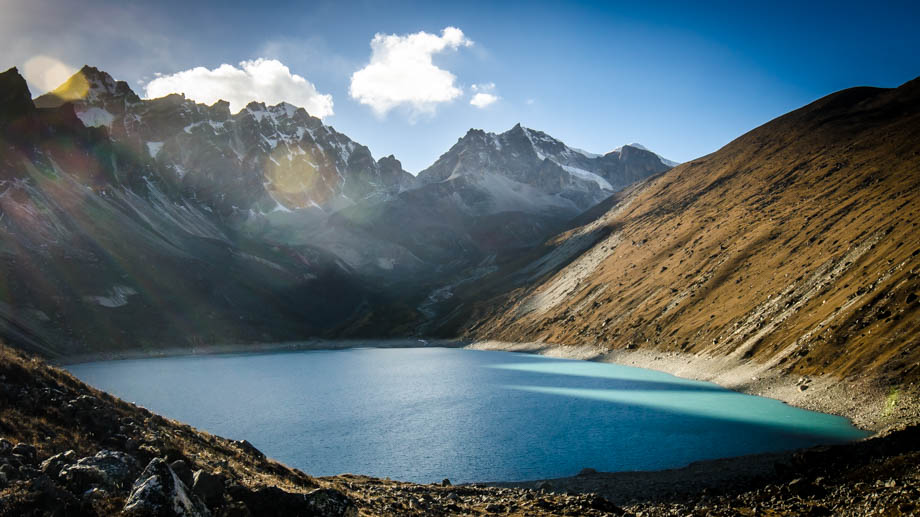 A shot of the 4th lake, Thonak Tsho, as I made my way back down to Gokyo. Henjola peak (elevation : 5925m) is at the top left of the image

is half way between the fourth lake and Cho Oyu Base Camp, and just never seemed to appear each and every time I would expect it to. I caught myself getting exasperated after I rounded each hill and corner, and wondered why I was starting to get a little impetuous. The words "It's not about the destination; it's about the journey" then came to mind, and so I began to slow down a little and to just enjoy the walk for its own sake. Time then seemed to pass by more smoothly and the day's walk became far more rewarding. As soon as I rounded the last hill and finally saw the lake, I was greeted by a savage gust of wind and had to literally take a few steps back in order to stay upright. The gusts of wind were absolutely brutal and seemed to have a life of their own. I would hear them coming, with a sound akin to heavy rain approaching, and would almost get knocked over once again when they arrived.Where the third and fourth lakes had been a vibrant turquoise, the fifth had a frozen, silvery sheen. This made the lake a contrast of sorts, as the drab colours made everything feel somewhat lifeless; whereas the noises around the lake made it seem like everything was alive. The sounds of the frozen lake were strange and otherworldly, and included: creaking, like old doors being opened very slowly; shattering, like glass plates hitting the ground; clanging, like metallic pipes being hit together; cracking, like dead trees splinting as they toppled over; and groaning, as if there was someone writhing in agony. 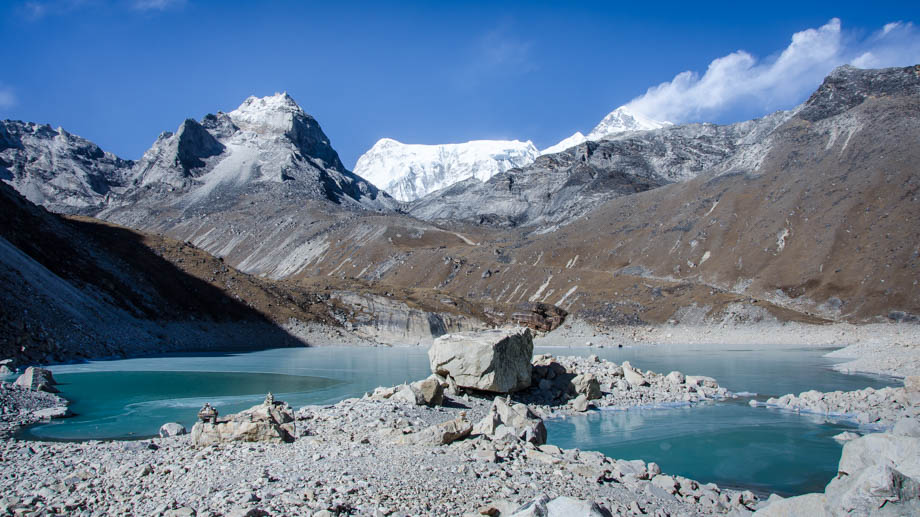 The 5th Lake, Ngozumpa Tsho, with Cho Oyu (elevation : 8188m) peaking out on the top right 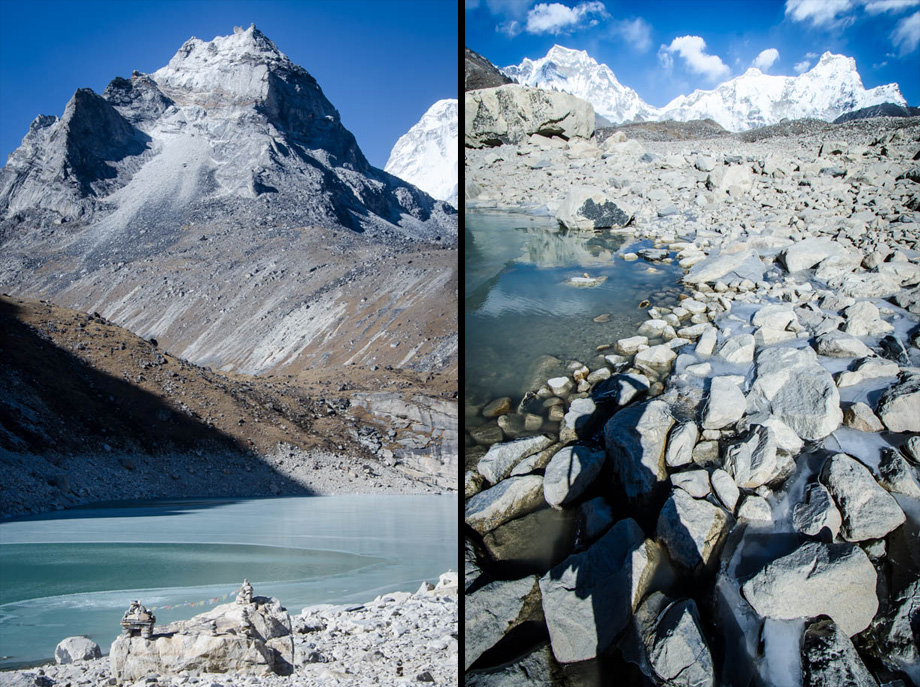 Cairns overlooking the 5th Lake, Ngozumpa Tsho; the peaks of Gyachung Kang (elevation : 7952m) and Chakung/Hungchi (elevation : 7029m)
I lingered for a while, watching a snow spindrift blowing off the peak of Cho Oyu (elevation : 8188m), the sixth highest mountain in the world, before making my way up to the viewpoint atop the moraine beside the fifth lake. 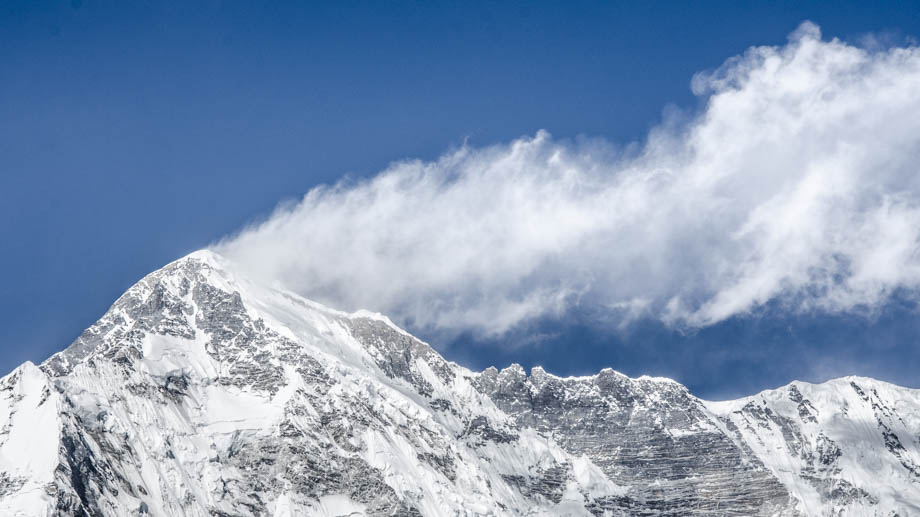 Next (Day 15) : The Ngozumpa Viewpoint

The views from here were absolutely gorgeous. This was the point where the Gaunara glacier converged with the Ngozumpa glacier, and the valley that it had carved out directed one's gaze eastwards all the way to Everest (elevation : 8848m). These were the best views that I had gotten of Everest since the beginning of the trip, but the views from Kalapattar did come in a close second. The South Col between Everest and Nuptse was very clear from here, as was the deep dark line that made up the Hornbein couloir on the north face on Everest. I watched for a while as the clouds shifted, obstructing the peak for a while before revealing it once again. The cloud-cover above the Ngozumpa glacier was also rolling in fairly rapidly, and the shadows that it cast brought the glacier to life--a veritable battle between the patches of light and dark had unfolded before my very eyes.
Looking east over the Ngozumpa glacier and the Gaunara glacier just beyond, with Everest in the centre (hover over the image to see the labels) 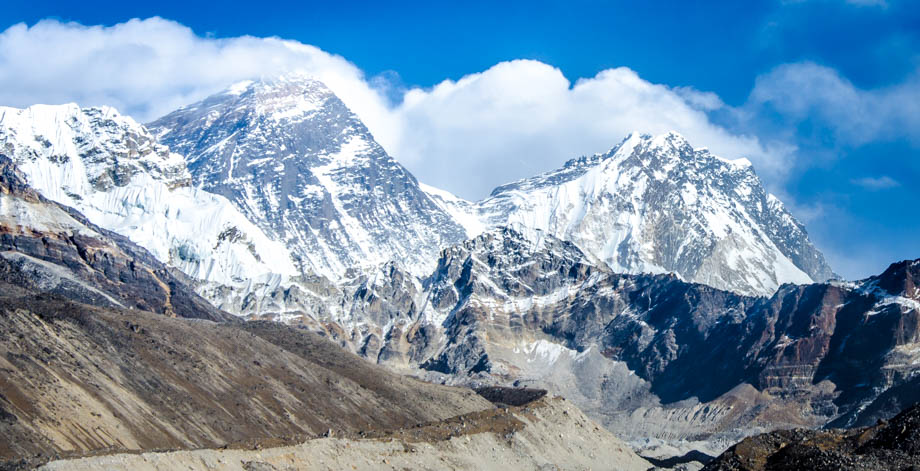 Looking north over the Ngozumpa glacier towards the peaks of Gyachung Kang (elevation : 7952m) and Chakung/Hungchi (elevation : 7029m)
As I sat watching, I noticed a man with a red jacket on the right side of the moraine. Right after, a gust of wind kicked up some dust which forced me to shield my eyes. As I looked back up, he was not there any longer. I walked over to investigate thinking that he could have lost balance and had slid down the moraine, and found with great relief that he had taken cover behind a large boulder. The man turned out to be Florian. He said that he still was not feeling too well but had just forced himself to walk up the path. We ended up walking (at least part of the way) back, chatting as we did. It turned out that Florian was also a rock climber but was more focused on trad, and had just finished a climbing trip in the United States. He used to be an architect but, like me, had grown weary of a 9-to-5 desk job and had abruptly quit his job to give himself some space to travel for a while. He said that he would be heading to India for a while after Nepal, and that he also had a job as a skiing guide waiting for him back in Canada.Florian and I met his mother once again as we returned to the lodge. She said that they would most likely stay in Gokyo for another day since neither of them were feeling particularly well. I ate dinner, which consisted of two cups of hot lemon (NPR200), dhal bhat (NPR500), and a fried egg (NPR200), before saying farewell to them and retiring to the room (NPR200) for the night.