Since today was going to be a big day, I decided to spend a bit more time 'fueling up' with three cups of coffee (NPR300) and macaroni and cheese (NPR450), whilst enjoying the views of Gokyo Tsho

that lay just outside the lodge. I left slightly later than the other hikers as I did not want to hike with anyone along the way. This was because I was in search of the feeling of complete isolation (or rather as close as I could get it), as the thought of no one being around you for many kilometres, although initially disconcerting, can ultimately be very emancipating.The hike felt like a gentle stroll in the mountains. The thin air and the huge Gokyo Tsho lake on my left took my breath away both literally and figuratively. Huge boulders dotted the sides of the trail and made me think of rock climbing and how much I missed it. Several hours had passed by then, and I began to have bouts of peridolia: rocks in the distance looked like the silhouettes of trekkers; and a mound of rocks that was most likely a cairn appeared to be a porter sitting on the rock with a sack on his back. The worst one however, was when I peered over the side of a cliff and thought that I saw the mangled remains of a trekker down below. When I peered a little closer, the 'remains' turned out to just be a pile of rocks that happened to be a little more vibrant than the rest.

Looking back to Gokyo Tsho; peridolia: a porter with a hood sitting on the rock with a sack on his back
Soon after, I came upon a man who looked a tad concerned. He asked me if I had passed anyone else or had seen anyone pass me by. When I told him that he was the first trekker that I had seen the entire day, he told me (with his thick British accent) that he had been with another man who was dressed in black and had had a silver mat strapped to his backpack. The other man had been just 20 metres or so behind him as he approached a ridge. Even after waiting for a while, the 'man in black' never reappeared.As I made my way onward, I kept my eyes peeled and would turn around every now and then to see if I could spot anyone. The trail's incline had been relatively gentle and somewhat constant before this, but as I approached the final push up to the Renjo La pass

(elevation : 5360m), the inclination increased considerably. I realised then that despite my slow and leisurely pace, no one had passed me, and that the British man had been the only person that I had met along the way.To this day I still wonder what happened to the 'man in black'. 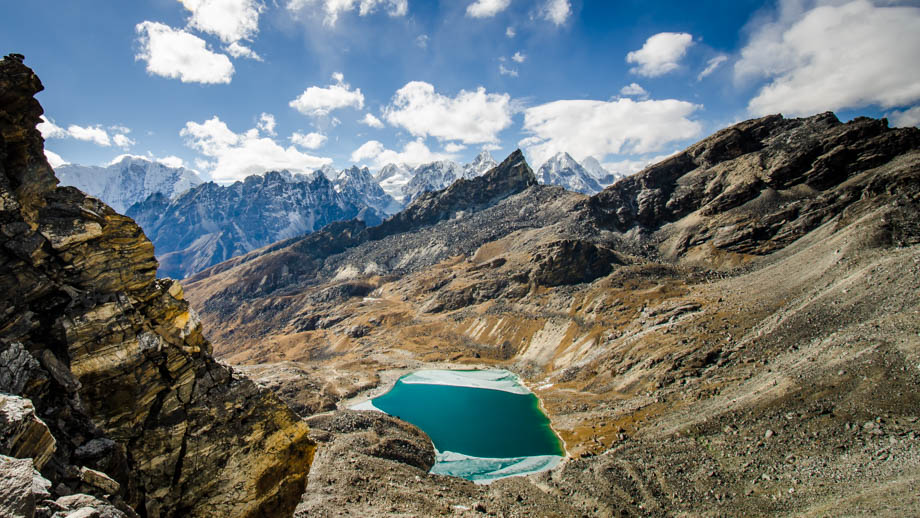 Looking west from the Renjo La pass over Angladumba Tsho. The sharp peak of Dragkya Chulung (elevation : 5630m) lies just behind the lake 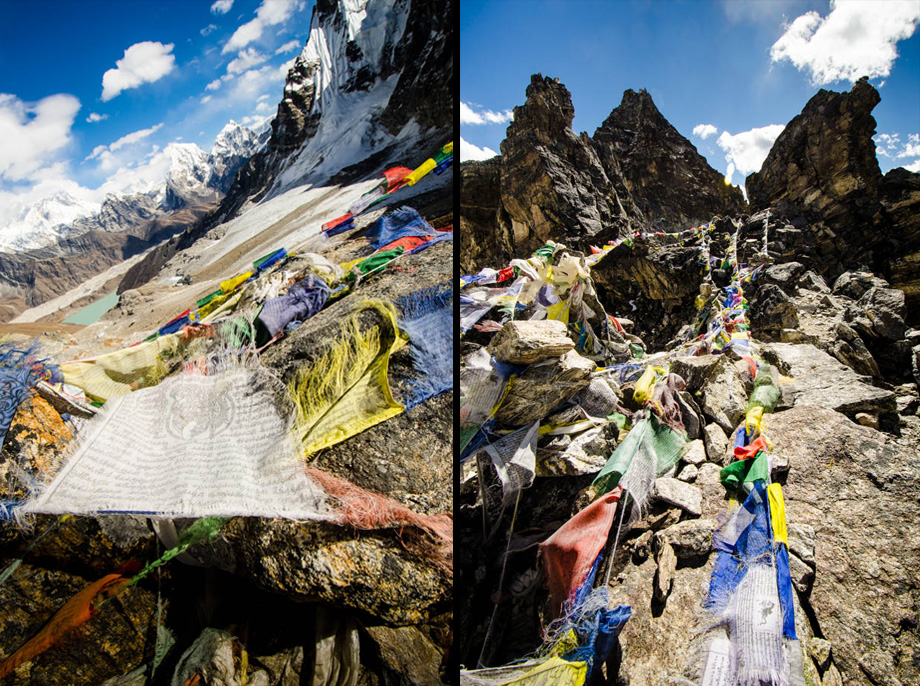 Prayer flags! Looking east towards Gokyo Tsho (left image); looking south (right image)
The first thing to greet me when I reached the pass were the birds. Alpine choughs (Pyrrhocorax graculus) peered down at me both when perched on the rocks above, and as they flew around acrobatically in the updraughts above my head. I had a feeling that they were waiting for me to feed them as these birds, which are from the same family as crows (Corvidae), are known to frequent tourist sites in search for food. Alpine choughs are adapted to the thin atmosphere of the mountains and have been documented to nest at elevations as high as 6500m. They have even been observed following mountaineers as they ascend up Mount Everest!

Alpine choughs (Pyrrhocorax graculus)
The views from atop the Renjo La pass were nothing short of spectacular, and were easily the best views of the entire trip! Peering east back towards Gokyo, I was able to see at least three of the fourteen 8000ers: Lhotse (elevation : 8501m), Everest (elevation : 8848m), and Makalu (elevation : 8475m), the latter being significantly more difficult to climb than the former two. Cholatse (elevation : 6440m) and Taboche (elevation : 6542m), the two peaks that had absolutely dominated the skyline when crossing the Cho La pass could also clearly be seen. I realised then that this was it, the so-called 'peak' of the trip, and that once I began to descend down the other side of the pass, the views would most likely be far less spectacular. The walking would also become much easier, since it was a descent from high-altitude, and I would start to encounter more and more people as I approached human settlements. Basically everything was to be downhill from here...
The spectacular view looking east from the Renjo La pass! (hover over the image to see the labels)

After almost an hour of just sitting and admiring the views, I began to make my way over the Renjo La pass and down the stone steps to the Bhote Koshi (भोटे कोशी) valley floor below. I passed by the frozen lake of Angladumba Tsho before the trail curved southward towards the second lake, Rermo Tsho. The walk from the pass to Lungden was fairly long, a little over six kilometres long, but the rewarding scenery that surrounded the valley more than made up for that. There were herds of yaks that were fairly close to the trail and the male would come closer to me and would stalk me as I passed the herd, grunting loudly just to make sure that I was well upon my way. When grazing, yaks tend to ascend to higher ground, and the grassy knolls around the valley seemed to be filled with them. The entire scene actually reminded me of of Ireland, except of course for the snowy mountains that adorned the horizon!

An abandoned stone house
I passed by several abandoned settlements and structures that were dotted about the landscape; some looked like they may have been left for winter but some looked to be permanently abandoned. The sun was beginning to set by then and there was an eerie stillness in the air. The last six hours had gone by without me seeing another person and I felt completely and perfectly isolated, a small speck floating in the vast space that surrounded me. The feeling was quickly dispelled when I caught sight of Lungden (Nepali : लुन्देन)

(elevation : 4375m) at bottom of the valley. As I approached the lodge, low-lying clouds rushed in through the valley and engulfed everything in an almost complete whiteout!Seems that I had reached Lungden just in time! 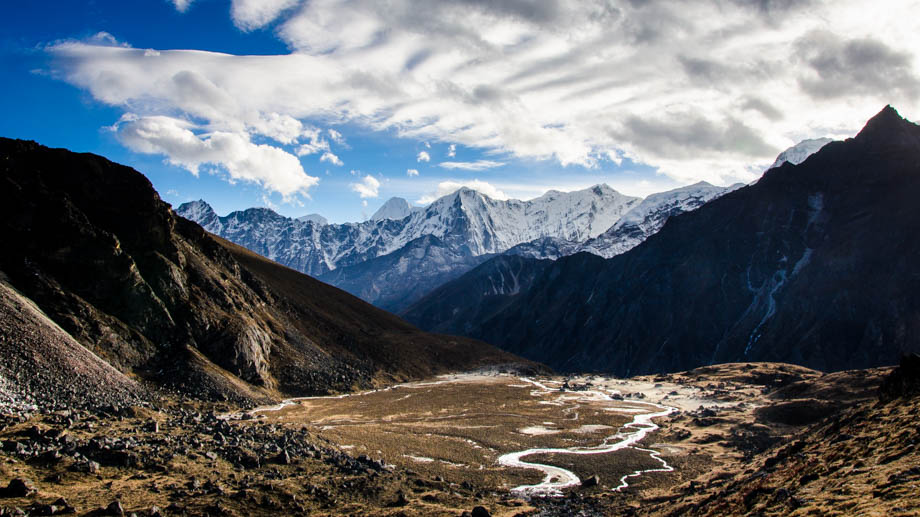 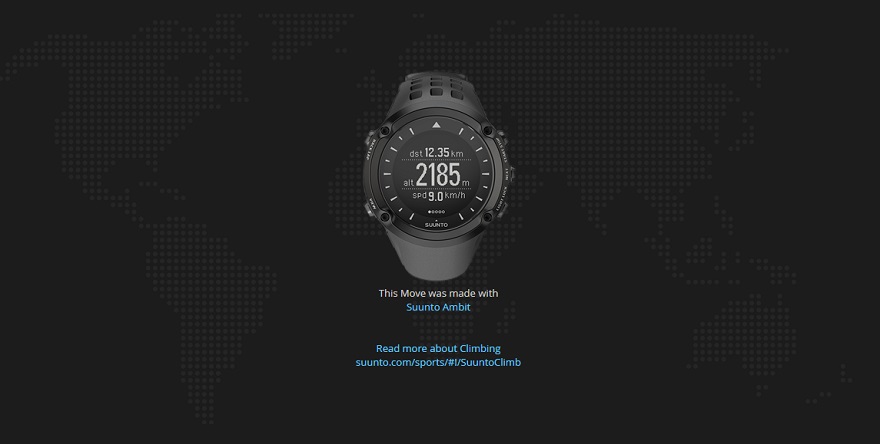 Next (Day 17) : Lungden to Namche Bazaar