We made our way back to the Thaiwand Wall Cave with the specific intent to climb up to the mouth of the cave, haul everything up, and then descend through the cave to the other side. This was something that we had planned to do on the previous trip to Thaiwand Wall but had unfortunately run out of daylight.

Having just returned home from my annual climbing trip to one of the world's best climbing spots, Railay, I found, to my dismay, that all Deep Water Soloing (DWS) had recently been banned! DWS is a thrilling way of climbing that entails free climbing (without a rope and harness) up a cliff and jumping or falling off the rock into the deep water that lies below! END_OF_DOCUMENT_TOKEN_TO_BE_REPLACED

Hike to the Cave

The cave itself can be accessed from either end although the cave opening on the Thaiwand Wall side requires one to climb up or abseil down (depending on which way you are travelling). The route to climb up is an extremely easy one, with just 4 clips, a difficulty grade of 4, and called '20 Kilos of Steel'. The start of the route is just to the left of the bamboo ladder that has been set up for access to the routes on the traverse to the right and is found right at the end of the trek through the jungle to Thaiwand Wall from the edge of the beach next to Rayavadee Resort.

The walk through the cave itself is relatively short and is made much easier with the presence of more bamboo ladders and ropes that have been secured there to help with the descent (or ascent). The tunnel to the other side has no light source so torches are essential. Before heading through the tunnel, turn around and look out the way you came as the views of Railay West and Tonsai from there are absolutely magnificent!

The tunnel is surprisingly cool and I found it to be a relief considering the searing heat outside. After a short walk you reach a small squeeze in which you will have to crawl through to get through but it emerges into a large cavern that opens up to the outside at the other end. After another short climb down another bamboo ladder you will emerge out to Escher Wall (also known as Tum Choee) that has climbing routes ranging from an easy 4 and all the way to an 8a+, appropriately called 'Fever Dream'. 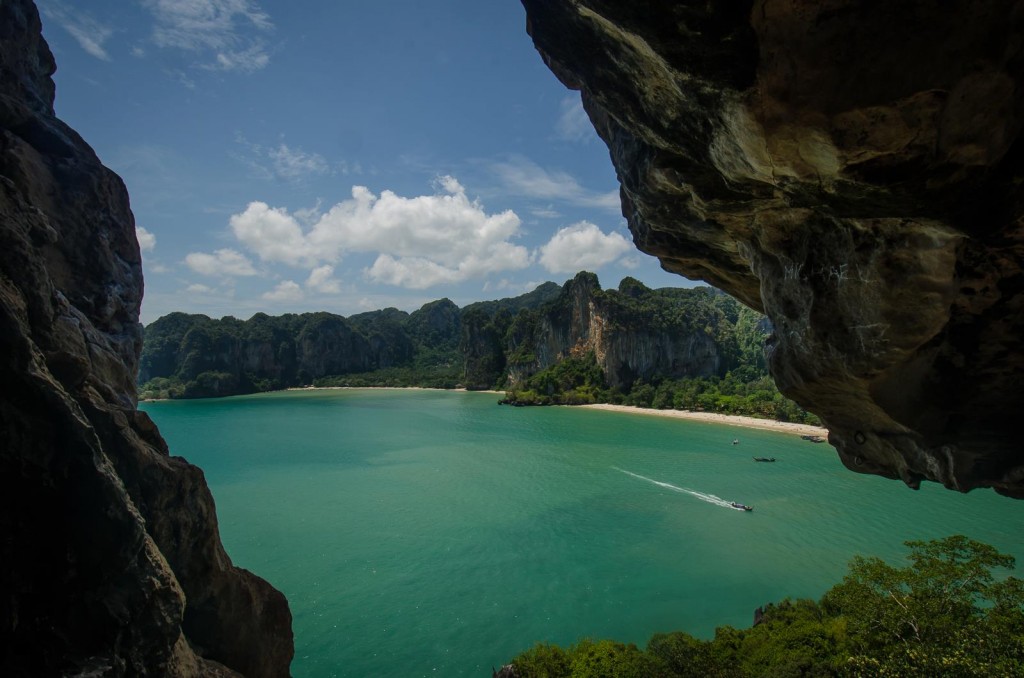 Walking beyond Escher Wall will bring you to Phranang Beach, a beach that is frequently referred to as one of the top 10 most beautiful beaches in the world. It is arguably the finest beach in Thailand, and possibly even in all of South-East Asia. The beach itself is a long and fairly broad strip of white sand next to beautiful turquoise water that is surrounded and framed by spectacular massive crags on all sides.

The final day wound down with not much action with a few going to the Diamond Cave which is located just behind the eponymously named Diamond Cave Resort. The cave itself is an easy walk through which takes approximately 10-15 minutes. The paths just outside the cave were completely infested with Long-tailed macaques (Macaca fascicularis) who entertained some and frightened others.

After spending some time at West Railay watching the sun set, we made our way back to East Riley and purchased the ticket that included the boat ride to the Krabi jetty and the van ride from there directly to the airport which we managed to purchase for THB1000 for three people (THB333 each). We went back to Rapalla bar to say our farewells and ended up eating our dinner there (omelette rice for THB70, extra plate of rice for THB20, and a plate of beef balls for THB100) for our last night in Railay.