The Arrival of Friends

The sun was out in all its glory that morning, prompting us to quickly grab our climbing gear and to head out to the Crazy Horse Buttress as soon as we could! We decided to head straight to the Furnace this time around, mainly because of the number of times that we had passed by the wall. The two routes that we decided to warm up on were located on the far left of the wall and had their anchors veering off to the right so we made it a point to watch our rope management with the tree as we lowered off. The first route was called 'The Easy Bake Oven', 5b+. Despite it being a very easy grade, the route was still fairly damp from the previous night's rain so it proved to be a little trickier than it otherwise would have been. The first pitch of 'Sideshow', 5c, the route just to the right, was a little longer and also more enjoyable. The upper section seemed to be fairly sustained but despite the sharp rock, there were good holds everywhere. We quickly made our way back to Jira Homestay right after as our friends, Ian and Geetha, were due to arrive.

The well-known Crazy Horse Buttress in Chiang Mai has been closed for the time being, and any climbing there whilst the closure is in effect will be in violation of the law. According to a recent announcement, the closure is due to ongoing investigations in regards to claims that rock climbing there has a detrimental effect on the environment. The closure has taken effect since the beginning of August 2018 and will remain in effect until further notice.
Ian and Geetha arrived at Jira's using the new shuttle service (first mentioned here) that only cost them (THB35 white van) each. The two of them apparently had some difficulty finding the van as a lot of people in Chiang Mai were still unaware of the new service. The journey ended up taking almost one hour and they were the only passengers in the entire van. We caught up for a while over lunch (yellow curry shared THB89/2; rice x3, THB30) before setting off for Crazy Horse once again, with Phet ("Diamond") the resident dog keeping us company.There were quite a few people at the main face this time around, but the routes on the far left were unoccupied so we decided to pair up and jump on them for a quick warm up. Geetha started climbing 'Ding Dong' 5b, and Fiona decided to give 'Rope and Rock' 5a, a try. Half way up the wall, a gecko (Gekko sp.) dove down from somewhere way up above and skittered across the rock right across Geetha, maybe 20cm from her chest. We were all taken by surprise and were still laughing at Geetha's reaction when a metre-long green snake (Suborder: Serpentes) dropped down, but this time right on top of Geetha, before slithering away after the lizard. It was so utterly and completely unexpected that it took us quite awhile for us to even react as we just could not believe what we had seen. The sight of flying geckos and snakes was still very new to us!

Tessellated Orchard Spider (Leucauge tessellata)
As we were recovering from the ridiculous spectacle that we had just witnessed, it suddenly began to rain. Most of the climbers had quickly bailed as the routes had become several grades more difficult within a few seconds. The rain had started very quickly but had also ended just as quickly, lasting perhaps less than 10 minutes. We waited for a while for the water to drain off the rock before heading back up to retrieve the gear that we had left behind. 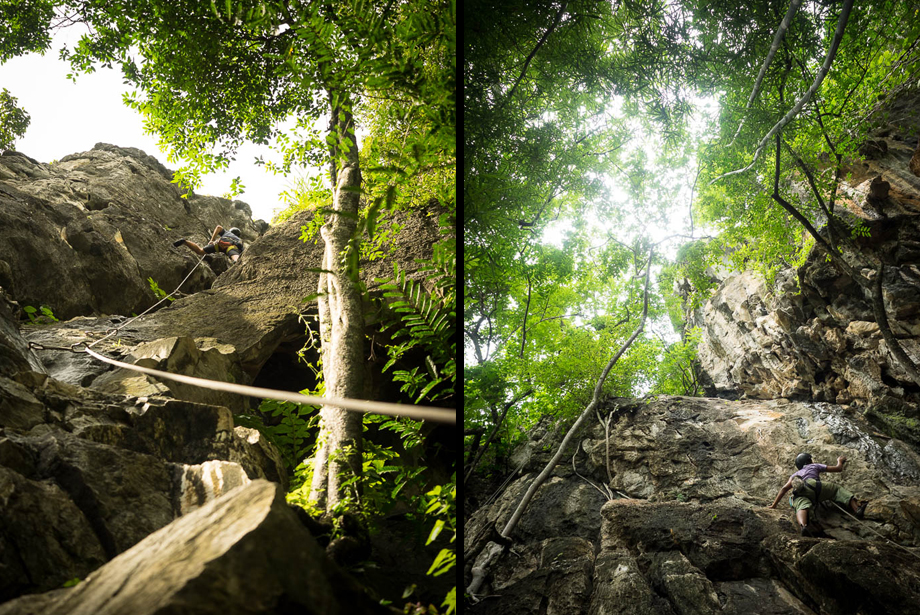 With the routes damp and the Archway occupied, we were forced to reconsider our options. We eventually decided to hike back up to the Rooftop, the wall we had climbed on the first day. The crag was surprisingly dry which to me was somewhat counter-intuitive considering that it was one of the highest and most exposed rockface. Geetha began to climb 'Hue Fah' (Ascending the Sky), 5b, and I decided to give 'Skyscraper', 6a+, a try. The route began with a climb up a huge, slanting slab of rock that was very run-out (bolts were far apart from each other) till at least one third of the way up. The rock was not completely dry so I had to take my time and be extra vigilant. After the slabby section ended, a section with huge narrow slices of rock begun. This section would dip into the rock and then veer right back out into a very exposed overhang. Lots of smaller loose rocks rested on ledges when the route dipped in, so I had to warn the others below of a possible rock fall and had to take extreme care not to knock anything off the ledges. After that fantastic route, which ended up becoming my favourite, I jumped back on 'Hue Fah' and anchored myself in to take shots of the others as they climbed up from below.

The magnificent view from the Rooftop! 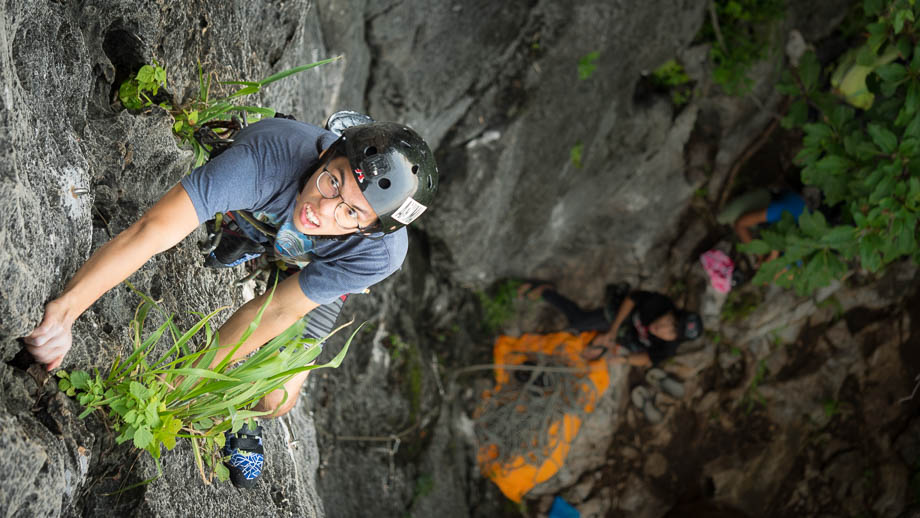 Ian climbing 'Hue Fah' (Ascending the Sky), 5b
The sun began to set and we hiked back to Jira's in the light of our headlamps, very eager to dig in to our dinner (Basil dish shared THB89/4; Morning glory vegetables shared THB59/4; rice x3, THB30).