The waters that surround the coast of Lanzarote also play host to a variety of small critters. The ones that immediately come to the minds of divers are of course nudibranchs. Mediterranean violet aeolids (Flabellina affinis) are ubiquitous here, but despite their miniature size--individuals only grow to a maximum size of 5 centimetres--their tiny splashes of violet can easily be spotted on the rocks and corals. These nudibranchs feed on cnidarians such as hydrozoas (seen below in the smaller image on the left), primarily those from the Eudendrium genus (Eudendrium spp.) which are common around the Canary Islands to the Mediterranean Sea. 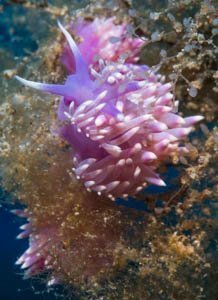 Mediterranean violet aeolids, like other nudibranchs, are simultaneous hermaphrodites which means that they can mate with any other mature member of their species. At the front of the nudibranch are two large chemosensory annulate growths that are called 'rhinophores' that function as scent receptors. The rhinophores detect chemicals that are dissolved in the water, and help the nudibranch to not only stay close to their food source, but to also find mates. Below the rhinophores are another set of long growths that are the oral tentacles, and below them yet another smaller pair that are the propodial tentacles.These aeolid nudibranchs are also covered with long dorsal growths, which are essentially protruding organs called 'cerata'. Cerata allow aeolid nudibranchs to absorb greater amounts of oxygen via their skin due to the increased surface area. If you look closely at the Mediterranean violet aeolid, you may notice an orange streak that extends into the white-tip of the cerata. This is the digestive tract that carries the nematocysts of the hydrozoas that the nudibranch consumes to the cnidosacs at the tips of their cerata, as a form of defense.Instead of cerata, dorid nudibranchs (which tend to be larger than aeolid nudibranchs) have a circular plume of gills on the posterior end of the dorsal surface. Since dorids do not have cerata, they instead store their defensive allomones (antifeedant chemicals) from the sponges that they consume within their mantle. In the case of Felimare picta, the concentration of these chemicals, which are called mantle dermal formations (MDF), can be seen as opaque white spheres within the translucent band at the edge of their mantle.

Common colouration of Canary Islands' Felimare picta; MDFs can clearly be seen along the edge of its mantle
Bearded fireworms (Hermodice carunculata) are also ubiquitous in the waters around Lanzarote. Their name is very apt as they have stinging white bristles, or chaeta, along the sides of their segments that, when flared, can penetrate skin. When they do, they break off and inject neurotoxins which produce a painful burning sensation, and can even result in nausea and dizziness. Alongside the bristles are red-orange growths which are the gills of the fireworm. These gills have a texture that matches another appendage at the front of the worm that is a chemosensory organ that functions as a scent receptor. 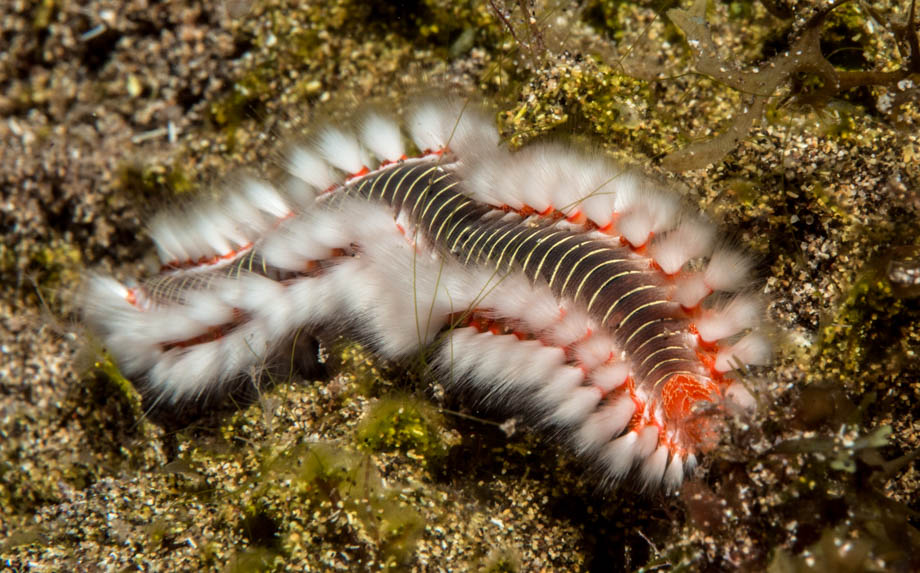 ..with its venom-filled bristles flared