is an oceanic volcanic island of the Canary Islands archipelago, and is located only 125 kilometres off the coast of Africa. Despite this, the Canary Islands are an autonomous community of Spain, and along with the archipelagos of the Azores, Madeira, and Cape Verde, make up the region known as Macaronesia. Lanzarote stands out from the the other Canary Islands, however, as the combination of its arid, semi-desert landscape, the predominating passat winds (trade winds), and its geographic location help to preserve its geological and volcanic structures, both on land and in the water.Lanzarote was not only designated a UNESCO Biosphere Reserve in 1993, but also a UNESCO Global Geopark (along with Chinijo Islands) in 2015. Global Geoparks are what UNESCO describes as "single, unified geographical areas where sites and landscapes of international geological significance are managed with a holistic concept of protection, education and sustainable development". The Lanzarote geopark has numerous 'geosites', or sites of geological interest--49 of them on land and 19 underwater--with the most famous of them being of course the vast lava fields of Timanfaya.

The lava fields of Timanfaya (Geosite LZ27) cover almost a quarter of the island of Lanzarote and are the result of a near-continuous string of volcanic eruptions that occurred between the years of 1730-1736 CE. The constantly juxtaposed lava from more than a hundred volcanoes flowed in all directions over a period of more than five years, and consumed everything in its path, from vegetable crops to entire villages, ultimately covering an area of almost 200 square kilometres.

On the first day of September, 1730 between nine and ten o'clock at night, the earth suddenly tore open near Timanfaya, two leagues from Yaiza. An enormous mountain emerged from the ground with flames coming from its summit. It continued burning for 19 days.

Some days later, a new abyss developed and an avalanche of lava rushed down over Timanfaya, Rodeo and part of Mancha Blanca. The lava extended over to the northern areas, running as fast as water, though it soon slowed down and ran like honey.

On September 7, a great rock burst upwards with a thunderous sound and the pressure of the explosion forced the lava going northwards to change direction, flowing then to the north west and west north west. The lava torrent arrived, instantly destroying Maretas and Santa Catalina in the valley. On September 11, the eruption became stronger. From Santa Catalina lava flowed to Mazo, covering the whole area and heading for the sea. It ran in cataracts for six continuous days making a terrible noise. Huge numbers of dead fish floated about on the sea or were thrown on the shore. Then everything quietened, and the eruption appeared to have come to an end.

But on October 18, three new fissures formed above Santa Catalina. Enormous clouds of smoke escaped, flowing over the whole island, accompanied by volcanic ashes, sand, and debris. The clouds condensed and dropped boiling rain on the land. The volcanic activity remained the same for ten whole days with cattle dropping dead, asphyxiated by the vapours.

An old map of the Timanfaya eruptions of 1730-1736 CE. Taken from 'Carracedo J.C. (2014) The 1730–1736 Eruption of Lanzarote, Canary Islands. In: Gutiérrez F., Gutiérrez M. (eds) Landscapes and Landforms of Spain. World Geomorphological Landscapes. Springer, Dordrecht'
The lava fields predominantly consist of a'a type lava, which is when the viscosity is high, either due to gas bubbles or relatively low temperatures. Cooled a'a lava ends up very rough and blocky and makes up a surface that is very hard to walk on. Pahoehoe lava (both a'a and pahoehoe are Hawaiian words), on the other hand, forms smoother, twisted, almost rope-like forms that are much easier to walk on. Areas of pahoehoe lava can also be found in Timanfaya, albeit are less common than a'a lava. 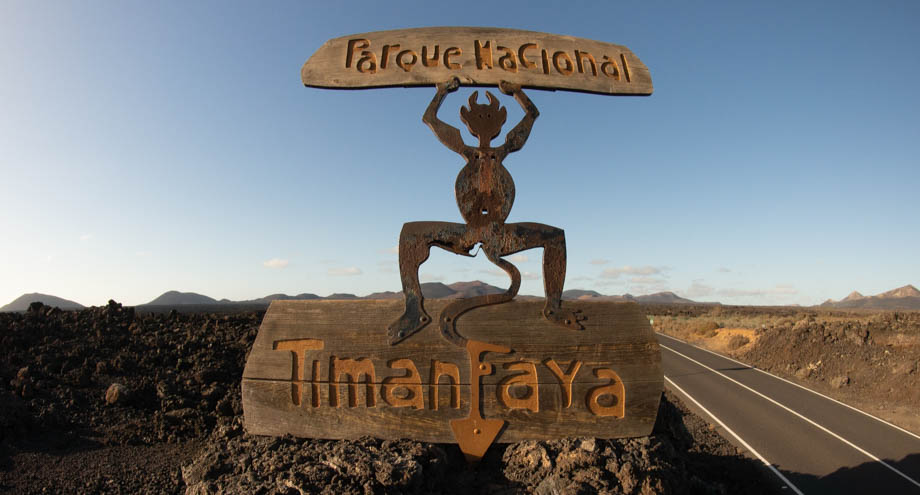 are also not permitted to wander around freely through the lava fields, which helps to reduce the erosion caused by footsteps and vehicles. Most tourists experience the volcanic landscape of the 'Montañas del Fuego' (English: Fire Mountains) through the windows of a bus as it winds its way around the narrow ‘Ruta de los Volcanes’ road for 40 minutes. For those who would rather explore the lava fields on their own, or who just want to skip the queues, crowds, and the €12 entrance fee, there are a few hiking options available in different areas of the lava field that are located in the adjacent Los Volcanes Natural Park (Spanish: Parque natural de Los Volcanes).

Unfortunately, the only way to really get to Timanfaya National Park is to rent a car or a motorcycle. Cycling is not really a feasible option unless you are an experienced cyclist--the distances involved are fairly large, the trade winds that whip across the island are fierce, and the mountain slopes are pretty brutal. Lanzarote can also be quite dusty due to the arid climate and the winds, and is also very exposed, so be sure to cover up if you do decide to cycle. Bear in mind that once out of town, there are not many places where you can lock your bicycle safely.

Driving, on the other hand, is relatively straightforward: From Puerto del Carmen, you need to take the LZ-504 northwards towards the town of Macher, then turn west to Yaiza along the LZ-2. There will be a turnoff

on the right after 9 kilometres that will bring you along the LZ-67. You will head north-east for just under 7 kilometres before seeing the 'El Diablo' logo that marks the turnoff into the park. The entire journey from Puerto del Carmen should take you just under half an hour.

Getting to Timanfaya National Park from Puerto del Carmen

(Geosite LZ19). Continuing north from Macher via La Asomada, for instance, will take you through the huge wine-growing region of the valley of La Geria

(Geosite LZ36). Here you will see vast black volcanic ash fields that are pockmarked with dimple-like craters called 'zocos', that protect the sweet Malvasia grapes (Vitis vinifera) from the fierce trade winds. Continuing north from there will bring you past the collapsed Los Cuervos caldera 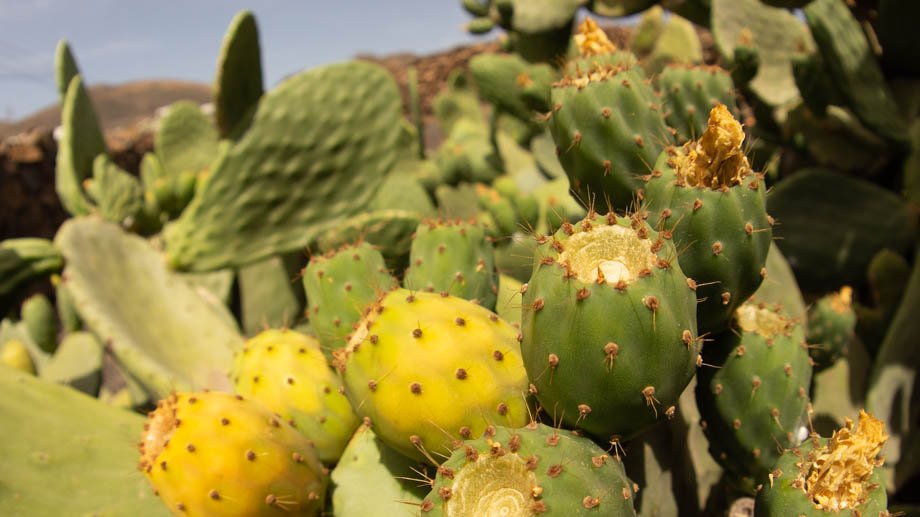 Prickly pear cactus (Opuntia sp.) by the side of the road
If you travel west from Yaiza instead of turning onto the LZ-67, on the other hand, you will find yourself on the LZ-703. This road runs north-south and is parallel to the dramatic coastline of Lanzarote. Travelling north along this road will bring you to the cliffs of Los Hervideros

(Geosite LZ37). These cliffs were formed by the fast cooling of the Timanfaya lava as it met the ocean nearly 300 years ago, and was shaped by centuries of sea erosion to form caves and outcrops.

(Geosite LZ35). The base of this volcano is basically half of a remaining caldera, the other half having eroded away by the ocean to reveal an emerald green lagoon inside, known as 'El Lago Verde'. The water within the lagoon is saltier and denser than that of the Red Sea, and the algae that gives the lagoon its vibrant colour is specially adapted to both the sulphur content as well as the high salinity. The colour of the water seems especially vibrant when contrasted with the backdrop of the black volcanic sand, the turquoise blue ocean, and the orange caldera that lies just behind it.