We ascended to a step that had a blue and white trail marker painted on it, and turned right to approach the wall of a structure. The structure was completely festooned with prayer flags and enclosed what was referred to as the 'secret cave'. The doorways of the structure were very low and narrow, and led to a clearing of sorts that had long drops off to the sides. There was a small 'room' off the clearing that contained some offerings of money, a small statue, a bunch of candles, and a small window that led to the cave itself. As I peered into the window, I caught some glimpses of the silhouettes of jagged rocks, but other than that the cave was almost completely engulfed in darkness. 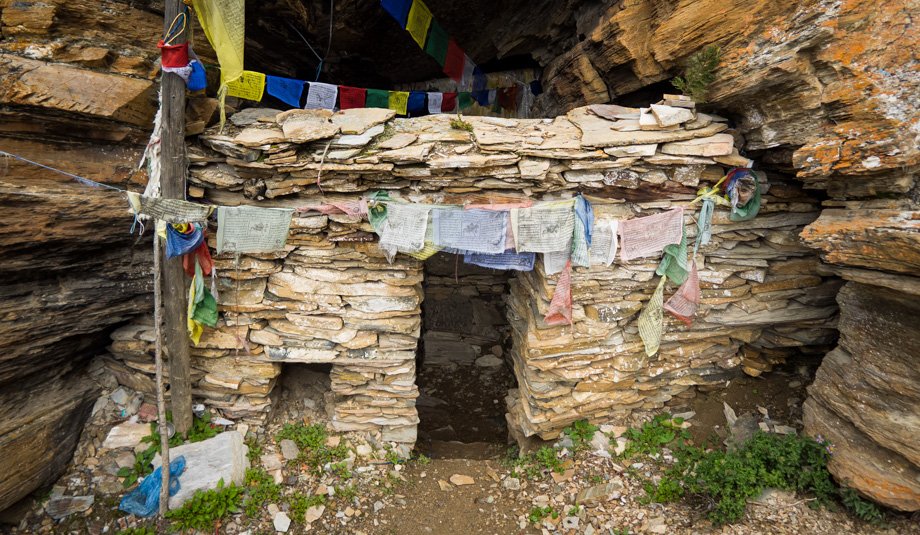 The room that enclosed the 'secret cave'
As we made our way out of the structure, we spotted a large Himalayan griffon (Gyps himalayensis) that was perched on the edge of the rock. We watched each other inquisitively for a few minutes, before the vulture suddenly launched itself up into the air and began circling the thermal currents ever upwards. The Himalayan griffon is a very large vulture, and with a wingspan that can reach 3.1 metres-long and a weight of up to 12 kilograms, is the largest and heaviest bird found in the Himalayas. These vultures used to regularly feed on human corpses during sky burials. 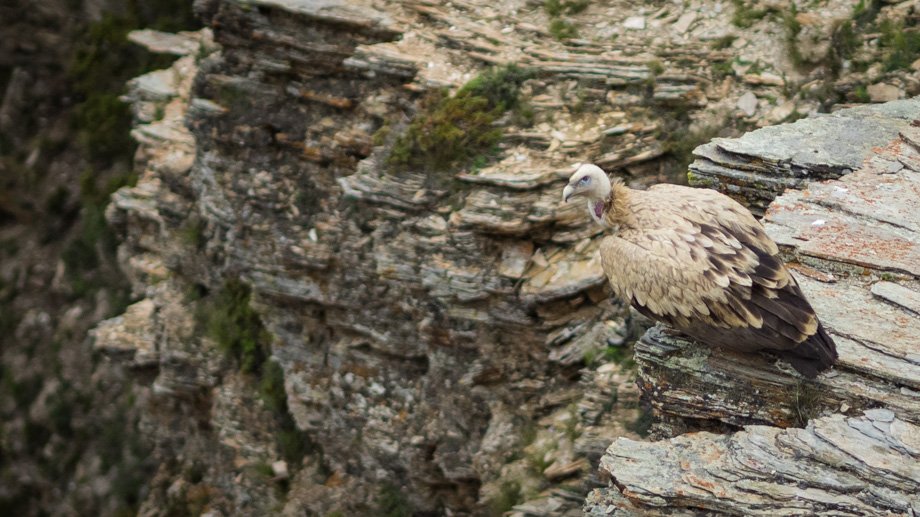 The steely gaze of a Himalayan griffon vulture (Gyps himalayensis)
Another vulture that was seen soaring above was the bearded vulture (Gypaetus barbatus), which is also known as the Lämmergeier (lamb-vulture). Like the Himalayan griffon, the bearded vulture is near-threatened , their numbers having dropped significantly in the past as people used to believe (without any justification whatsoever) that these birds carried off their children, pets, and livestock. Bearded vultures however are the only known animals to have a diet that is made almost entirely out of bone. They have developed several traits that allow them to live off this diet, which include a stomach acid concentration that is estimated to be around pH 1, as well as the learning of skills such as the dropping of bones from great heights in order to expose the bone marrow within.

A bearded vulture (Gypaetus barbatus) on the left, and a Himalayan griffon vulture (Gyps himalayensis) on the right. The unusual lozenge-shaped (rhombus, ◊) tail of the bearded vulture is one of the easiest ways to identify it from a distance.
We then dropped back down the slope and followed the ridge-line until we could see stone stupas lining the top above us. As we approached the stupas, great whirlwinds of alpine choughs (Pyrrhocorax graculus) were seen haphazardly circling around above us--the flock (I refrain from using antiquated veneries such as a 'murder' of crows, or an 'unkindness' of ravens) easily numbering 70 or more individuals. The flock would occasionally dip low and almost skim the ground, and their shadows would make their numbers appear twice as much.

Looking south-west towards the steep slopes that encircle the Ice Lake, or Kicho Tal
Just beyond the ridge, looking far off to the west, was the Chulu waterfall. A trail could also be seen that followed the sides of the arid, almost Upper-Mustang-like, slopes before descending into the distance. We made our way over to the left of the ridge and cut down the slopes to the main trail that ascended to Kang La Pass (elevation : 5306m). The clouds still obscured the peaks, so we could see neither Chulu East (elevation : 6429m) nor Thorong Peak (elevation : 6144m) to the north-west.We eventually reached a rise of sorts that had a small stone hut that was surrounded by cultivated plants. Pikas (Ochotona macrotis) were ubiquitous here, and could be seen as they bounded from patches of alpine grass. We sat there for a while watching them--perhaps seeing ten that morning--and as we did, a horse trotted over from above and stopped in its tracks just staring at us. The horse was probably just as surprised to see us as we were it, but it relaxed after a while and began to graze on grass. We continued on after it had trotted away.