We reached the hamlet of Chyamche (elevation : 1430m) at almost exactly noon. We were a little hungry by then, and so made our way straight through the hamlet, and descended down the stairs that lay after it to a bridge. We found a place to sit just before the bridge itself, and after removing a bunch of leeches (Order : Hirudinea) from our feet, began to cook a lovely lunch. We spent almost an hour there and not a single person passed us by. We were completely surrounded by insects whilst there, and could see various instar stages of the almost twenty larvae of the yellow coster butterfly (Acraea issoria) that we found. The larvae were very similar to those of the Indian tortoiseshell (Aglais caschmirensis), but despite both of them having almost identical spiny satae, the yellow markings that ran down their bodies were clearly quite different.

The larva and pupae of the yellow coster butterfly (Acraea issoria)
Other larvae that we encountered quite frequently were that of the common tiger moth (Campylotes histrionicus). These moths belong to the family Zygaenidae; and like most other Zygaenid moths, fly during the day. They also contain hydrogen cyanide, and so have aposematic colouration to warn predators of their toxicity. Like the two other larvae mentioned above, the larvae of the common tiger moth also has remarkably pronounced satae. The satae in this case however, is not spiny, but appears rather fluffy!

Common tiger moth larvae; a female common tiger moth (Campylotes histrionicus)
The path continued up slippery rocks on the other side of the river, and we were flanked by long waif-like grass that clung precariously to the sheer cliff face next to us. This section of the trail was completely surrounded by moss. Ferns lined with their spherical sporangia also decorated the sides of the path, and the occasional overhanging slabs of rock created a tunnel-like feel. We passed a very impressive waterfall across the river, but by then, I had completely lost count of the number of waterfalls that had left me spellbound. There were just too many. The trail passed through fields of cannabis (Cannabis sativa), before beginning an ascent up a hill, past the occasional skink (Family: Scincidae) as it scampered away on a boulder, and up to a grassy rise. It was here where we bumped into Raleigh, the only other hiker that we had seen in the past two days.There were also plenty of leeches around, as well as groups of tree yellow butterflies (Gandaca harina) and pupae of yellow coster butterflies (Acraea issoria) hanging from bushes. The frilly white 'tails' of planthopper nymphs (Superfamily: Fulgoroidea) could also be spotted on leaves every now and then. These very unusual 'tails' are actually wax secretions from glands on their abdomen that are thought to be used as a form of concealment. The lantern bug (Pyrops sp.) was another unusual planthopper that we encountered. These bugs tend to have unbelievably long protrusions, or snouts, that emerge from their heads. Unlike their name though, these 'snouts' do not glow like lanterns, but are hollow and are used to help them reach into tree bark to feed on sap. 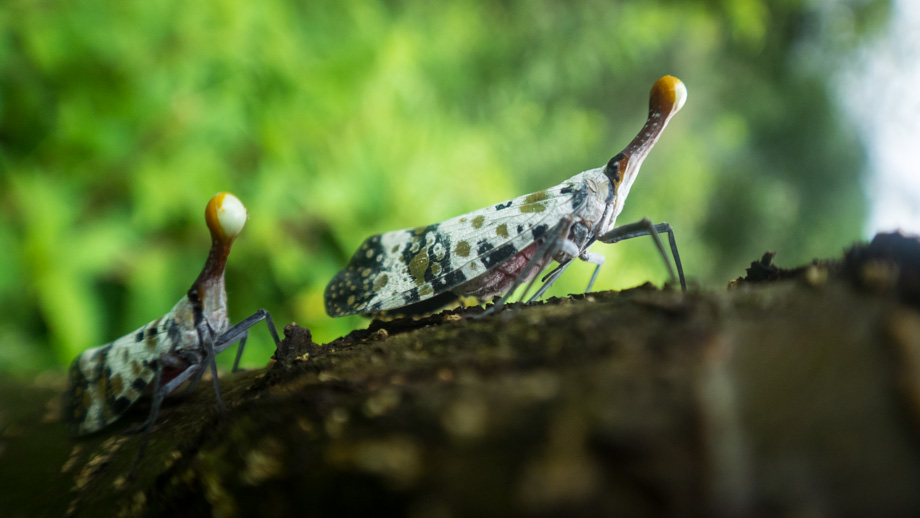